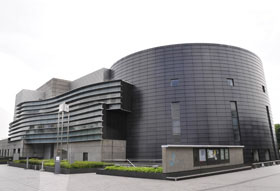 In Japan’s capital city of thousands years, a classical music palace has been born: Kyoto Concert Hall has been constructed as a part of a commemorative project in 1995, respecting 1200th anniversary of the ancient capital “Heiankyo”. The walkway leading to the main entrance, a tidy arrangement of rust-granite bridge and sculptures forms a sort of Japanese-style garden, and the entrance hall evokes a musical inspiration you are about to enter. In its center, twelve pillars representing the twelve zodiac symbols of ancient Eastern chronology are set at regular intervals, and their rhythmical placement instills a sense of anticipation of the musical intoxication to come. 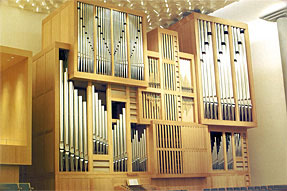 At the Main Hall, you will find a truly magnificent acoustic space with its time-honored “shoe-box-style” auditorium added modern refinements. The commanding presence at the head of the stage is Kyoto Concert Hall’s 90-stop pipe organ, built by eminent German organ builders Johannes Klais Orgelbau gmbH & Co.KG. Therewith Kyoto Symphony Orchestra based on the hall would conduct you into a world of living sound.
Ensemble Hall Murata is designed to provide optical acoustics for performances by small orchestras or piano or chamber-music recitals. It is sort of mini-universe specially created for close encounters with music. Its unique interior design- stellar constellations on the ceiling and lines of light that point to magnetic north - brings a most unique atmosphere. 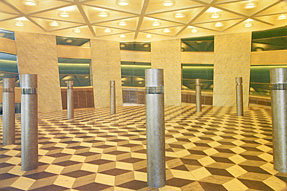 This symphony hall, built with state-of-the-art technology and expert knowledge to create the optimal conditions for performing and appreciating music, could be described as one huge musical instrument. It leads you to spiritual transition from citizen of the world outside to visitor in a realm of pure musical immersion.